A Quick Chat With Chef Mel

In this quick one-minute chat with Chef Mel you’ll discover the source of her creativity and what she loves to share. Hear about her growing up on a remote property in Zimbabwe South Africa and how that influenced who she is today.

Your Culinary Journey With Chef Mel

“Tell me what my cooking style is and how I have helped your cooking or changed your life!”

{
I used to so look forward to our cooking classes then called Gecko Culinary Adventures in Durban. I got my first certificate in April 2005. Mel the recipes you taught us I still use today. I would say move over many a famous Chef here comes Mel With your talent and enthusiasm and passion you can only go one way and that is right to the top. Congratulations love you and what you do x.
Rike Freifrau Von Ketelhodt-Kraske
{

Chef Mel has shown me what a difference the plating makes. It can be a certain basic meal but by layering your sliced meat and making the potatoes pretty with a bit of chopped parsley. Using plates that you use as display only getting adventurous.

Mel’s cooking style is practical and fun. She has taught me to be more courageous in the kitchen and how to present a beautiful plate. Her recipes are easy to follow and so incredibly yummy!

Lindy MacPherson
{
Chef Mels cooking style is just FAB U LOUS darling. Every meal is an adventure Chef Mel puts the “fun “ into cooking and and inspiration for me is creating delicious and delectable meals. She has taught me to look into the fridge and use what is available to create exciting non boring meals, she has taught me to experiment and push the boundaries. The best part of our lessons was always seeing what we could adapt from our own fridges and the sexy cooking short cuts and handy tips are the best! Cooking is now fun thank you Mel
Esther Currie
{

Chef Mel has a flair like no other. She has taught me to be more experimental in my cooking and presentation. She always goes the extra mile.

Hey Mel , you make everything look so easy mixed with your great sense of humour and fun . Definitely an inspiration and love your classes . Still haven’t managed to stuff up your world famous focaccia

Before I did Mel’s cooking school I was impotent but now all my friends enjoy my creative sexy paddock to plate.

Chef Mel’s cooking style is FUN! My favorite for the past 10 years has been her poor man’s creme Brule and the basic bread dough recipe. Miss you here in Durbs!

Chef Mel is so vibrant and her passion for fun food is so easy to share!

Chef Mels cooking is fun and exciting. She is so passionate it makes you want to do the “cheffy shake!” Chefs always make something look easy to do.. until you try it yourself!! but she has a way of making everything easier with so many great shortcuts and tips along the way to build your confidence…you always feel like a success in the kitchen doing it Chef Mels way

Chef Mel’s cooking style makes things quicker and easier and teaches you little tips and tricks to make your feel more confident. As a result, my cooking tastes better and she is an expert at culinary bling and presentation so your dishes look even more amazing. I am grateful for her energy and passion for good food.

Brenda Forrest
{
Mel is passionate, kind, knowledgeable and an amazing Chef. Her ability to encourage and be so kind is almost the thing of text books… I truly think Mel is 1 in a million and I’m very blessed to call her a friend.
Brett Harris
{

Chef Mel is a great chef and teacher as she gets you excited at how simple and fun yet delicious she makes cooking ! Her style is so encouraging and confident you feel you can cook anything ! With her classes you learn tricks to make your dinner party perfect

Modern, elegant and approachable for the home cook.

Chef Mel Taking ON THE WORLD

With a genuine smile that can light up a room, an entirely new and fresh approach to cooking and a culinary lingo all of her own, Chef Mel Alafaci is quickly becoming a globally chef and personality.  Mel believes her flair comes from living in various countries and travelling extensively.

Mel is sassy, talented, witty and funny and is also fondly known as “The Happy Chef” by her students. Mel’s clever cooking approach focuses on simple versatile recipes with time spent on excellent presentation.

Mel’s style of cooking is fun, quick, tasty, colourful and bursting with personality and texture.  Mel promises she can make any dish look ten bucks more expensive and will show you every shortcut she knows to get you a round of applause with minimal effort.

Mel’s other passion is travelling and discovering different cultures and cuisines, and then bringing those ideas and influences onto her plates.

Mel In Her Kitchen Studio 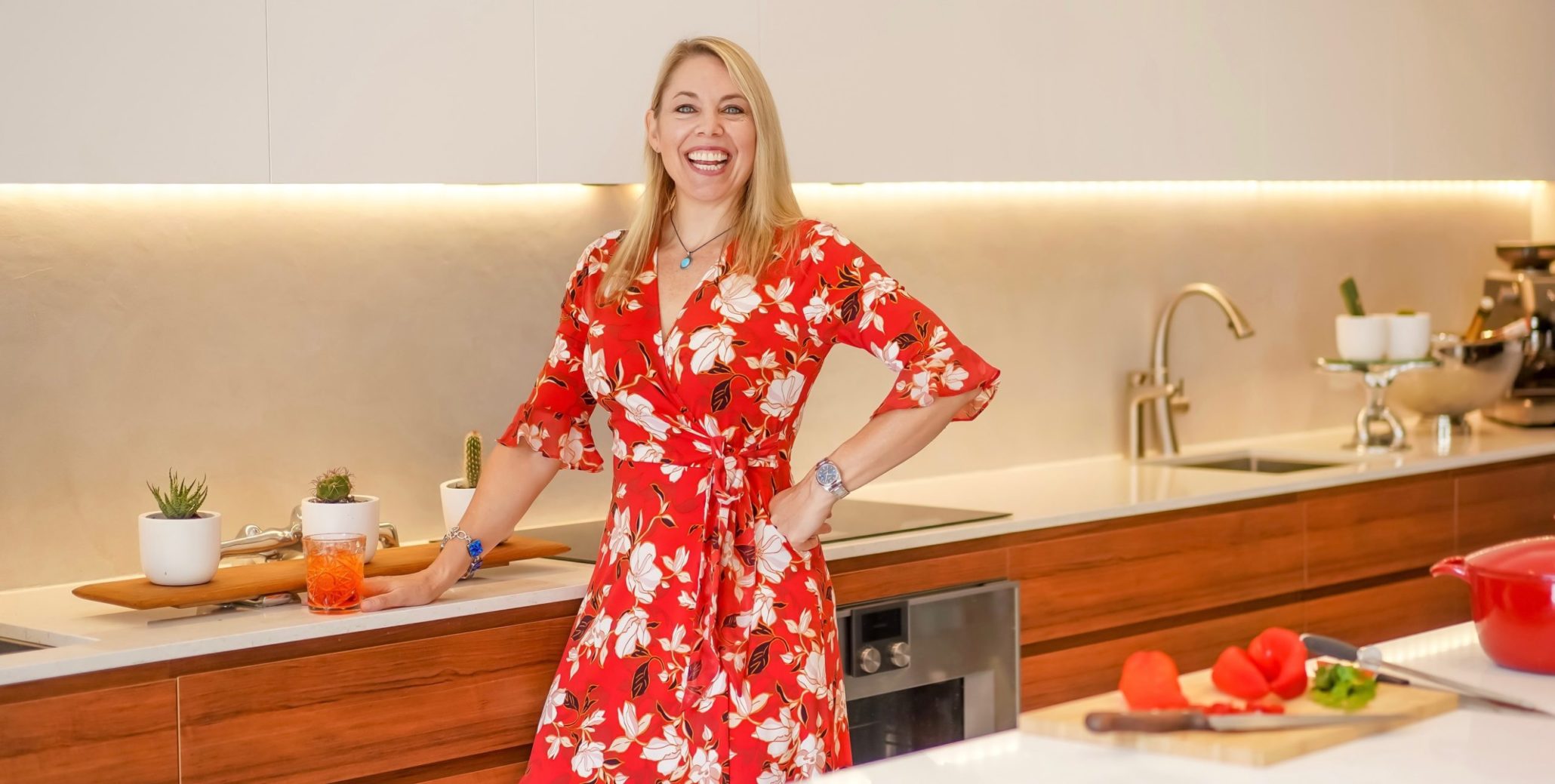 This enthusiastic, entertaining, African-Australian chef and cooking school owner says with a little know how anyone can plate up spectacular spreads similar to what you’d expect to see in  restaurants. Mel is brilliant at making everyday dishes dazzling. She promises that after one of her classes you will live happily ever after. She ardently believes that even boring mince and chicken breasts can be absolutely sexy.

So it came as no surprise when the Royal Queensland Show, the awesome EKKA asked local celebrity chef Mel to be their host and presenter at the 2019 Ekka Cooking School and Celebrity Chef Stages.  What an honour and a privilege.

She’s blonde, she’s African-Australian, she’s bubbly and she’s a talented chef and she runs one of Brisbane’s most successful cooking schools.

Chef Mel’s happy smile is one of the reasons she’s become a regular on lifestyle and cooking segments on Australian radio and television shows over the years. Chef Mel (Vanilla Zulu Executive Chef) believes in using the freshest local ingredients and having a repertoire of reliable recipes that you can rehash and refresh by using different sides and accompaniments. Just as you would wear the same little black dress time and again and dress it up with new earrings, a new handbag new shoes…it’s all about culinary bling and accessories! If you shop clever, you can cook clever too. It doesn’t have to be expensive but you too can achieve a round of applause if you know some valuable ‘‘ tricks. Armed with a sassy sense of Mel is willing to share everything she knows about her passion…which is cooking! Her students LOVE how she makes cooking fun through clever analogies, they even say she “speaks Mel” a language all of her own that explains her culinary procedures in a quick and clear way.

Zimbabwean-born chef Melanie Alafaci (nee Townsend) owns the Vanilla Zulu cooking school in Teneriffe, Brisbane, where she gives foodies and newbies a fun and relaxed atmosphere to “go wild” with food.  Vanilla Zulu is Melanie’s second cooking school and the culmination of an eclectic career spanning nearly two decades, flavoured by a life rich in experience. 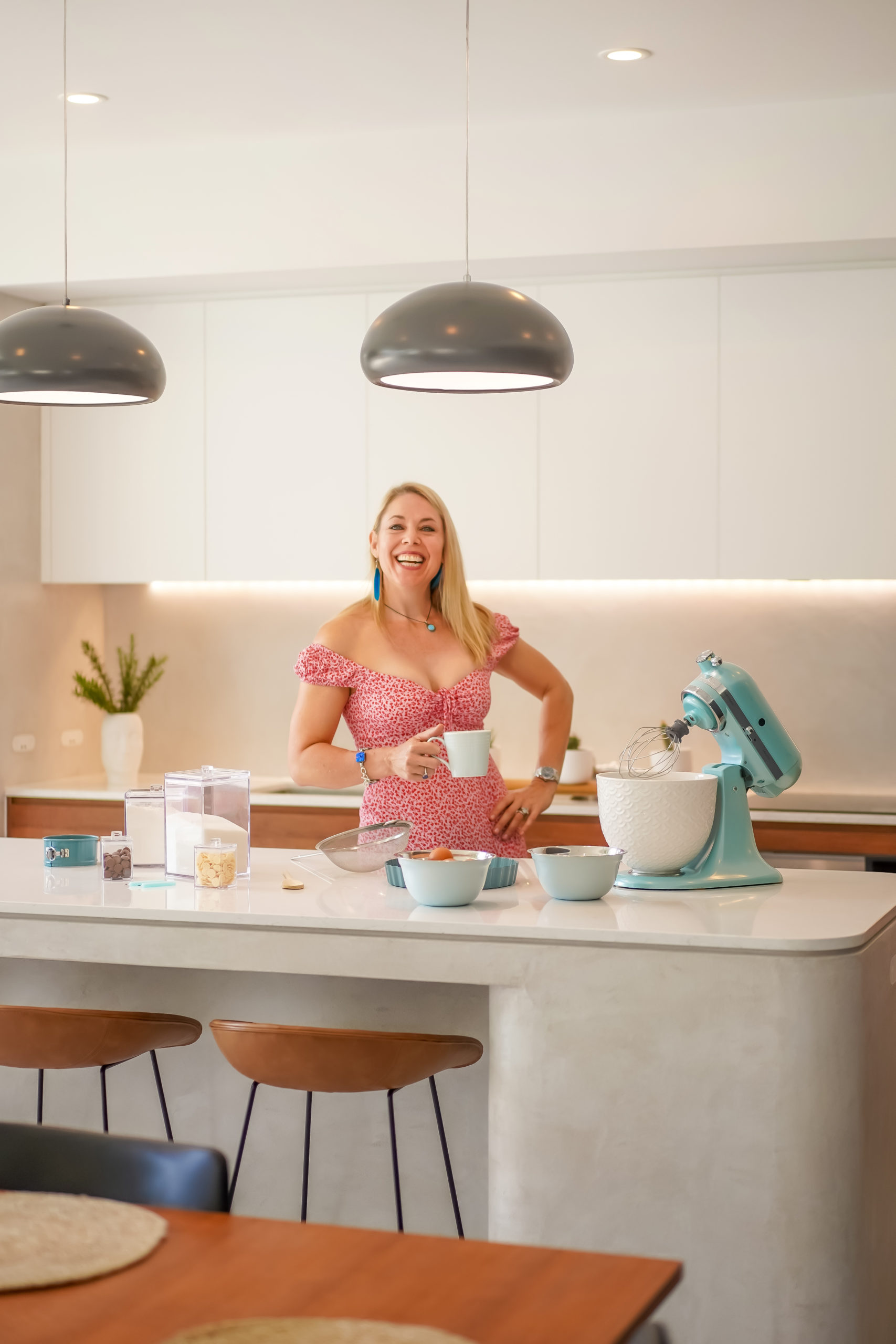 Chef Mel in the Media

“Vivacious Melanie Townsend holds court with aplomb. An interactive class that flourishes with lots of wine and laughter. Even shy students will be coaxed into the cooking action!”  Tracy Gielink for Food and Home Magazine, South Africa

“Having a chat to vivacious blonde bombshell Mel Alafaci, it doesn’t take long to figure out behind the huge personality is a seriously good chef who emerged from humble beginnings” Valerie Ferdinands for My Village News, Brisbane 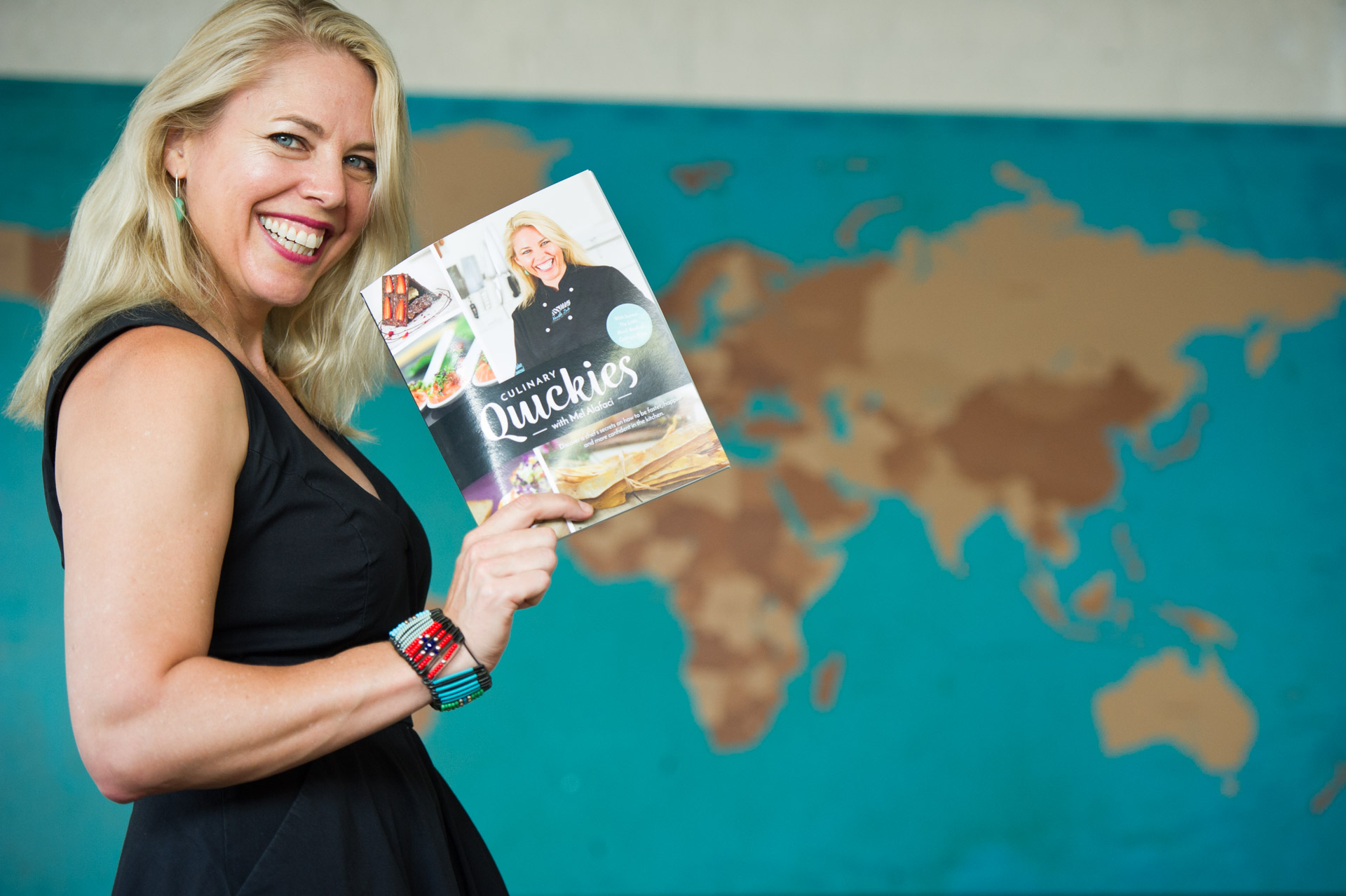 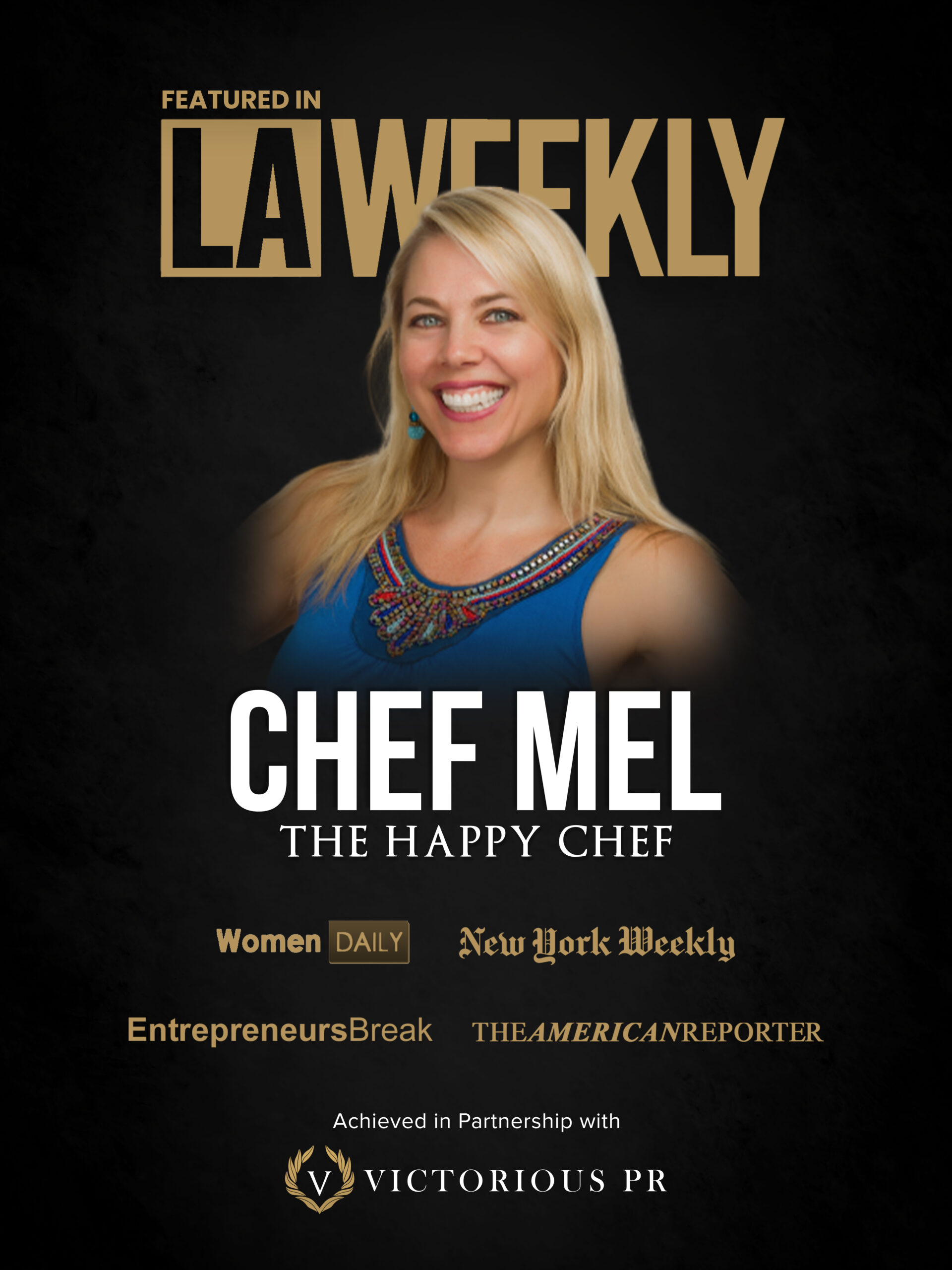 Chef Mel Before Becoming a Chef

Her love of food was born during her childhood, long before her career as a chef.

Born to a mother and father that lived in the Zambezi Valley bush in tented camps, Melanie’s father was one of the last great white ‘bushmen’ employed to control the spread of Tsetse flies in the early 70’s.  Melanie’s family fled the Rhodesian Bush War for rural South Africa in the early 1980s after two family members were shot and killed by terrorists in the worst of it in 1979. Melanie remembers walking over the border with nothing but two suitcases, her father’s hunting rifles, and the clothes on their backs.

Cooking quickly became a comfort for Melanie who grew up on remote farms where entertainment was sparse.

Melanie’s parents intuitively gave her a cook book at age five and her brother would read the recipes aloud while she concocted her food masterpieces.

Melanie completed her formal chef training in Durban in 1994, where she went on to start her first cooking school. First, though, she took her career abroad, backpacking her way around the UK and working at various hotels and restaurants. Always quick to make friends, locals would bring Melanie all kinds of local fare on which to work her culinary magic, such as exotic berries and pheasants with the feathers still intact! Her fondest memory during this time was cooking for Dusty Springfield at the Cregg Castle in Galway.

Heading back to a dismal job scene in Durban in the late 1990s, Mel became quickly disgruntled with long hours and feeble pay in the kitchens and started her first cooking school venture, Gecko Culinary Adventures, was established in 2001 and run humbly from a granny flat attached to her home. Hers was the first school in the area to offer team building through cooking, winning Mel four business innovation awards. Her bubbly personality gave her local celebrity status and scored her frequent guest spots on local food shows and magazine articles.

When she bid farewell to South Africa eleven years ago in search of a safer life for her and her two young sons, Mel had a burning desire to ensure the spirit of her cooking school lived on here in Australia. Vanilla Zulu, her latest venture, debuted on the Brisbane food scene midway through 2011.

Melanie is now a published author with two very exciting recipe books under her belt and is currently working on her third.  Melanie is proud to have been ambassador chef for Stork Cremendous, Gourmet Garden, Crystal Bay prawns, Movenpick Ice Cream, ChefWorks,  NEFF appliances, Bosch appliances and is also an avid blogger which allows her to express her excitement about her latest food find! As a global traveller she loves to explore and make delicious discoveries along the way.

Behind the scenes, Melanie consults for some of Australia’s leading food producers, so her gourmet flair is unwrapped and enjoyed by many on a daily basis!

She is proud to share all of her foodie travel experiences to her loyal fans, sharing her favourite foodie picks along the way and then creating recipes from the inspiration.  A proud African, she loves to share her African roots with her Aussie and global fans. 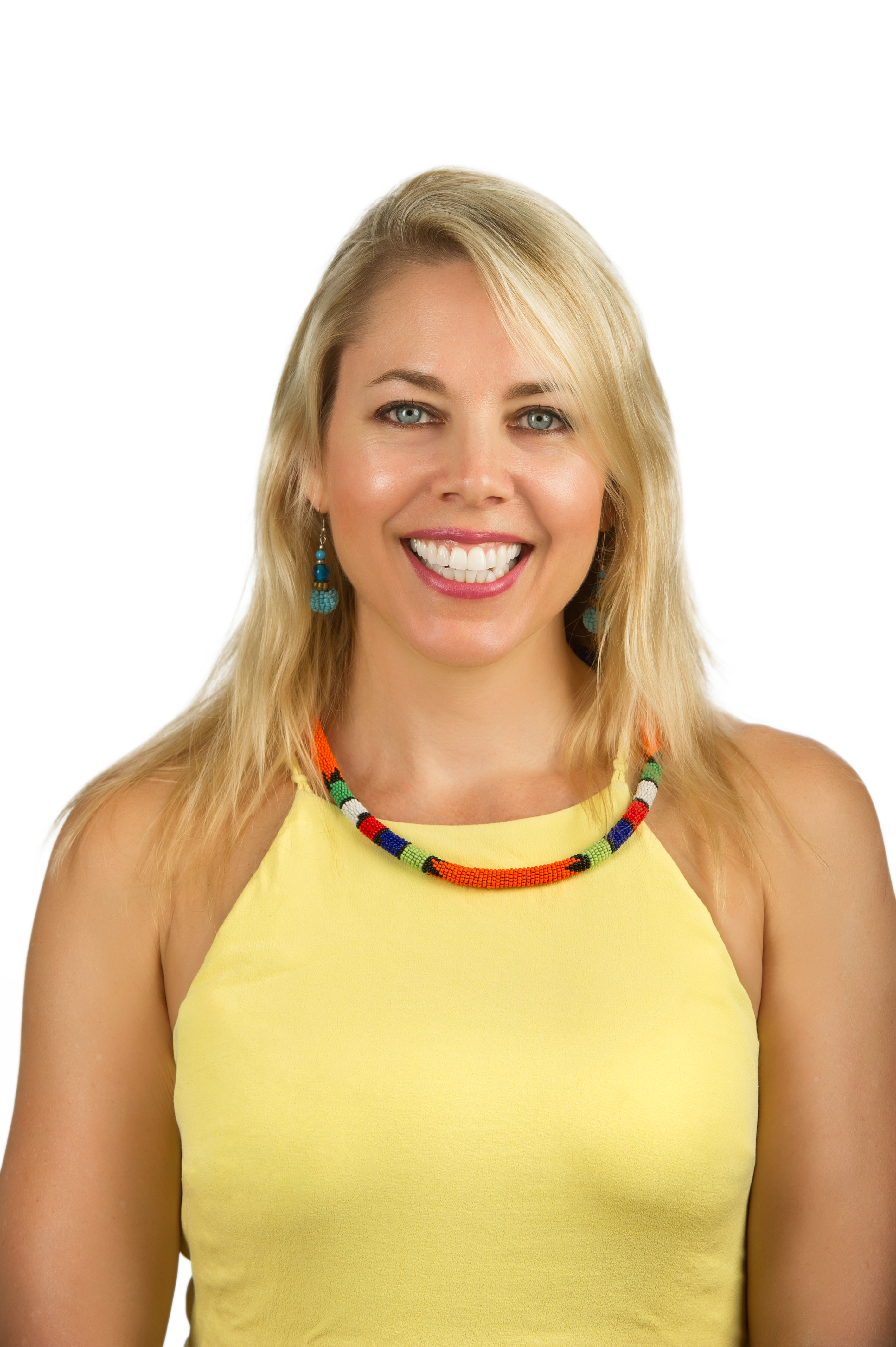 Some of The Many Companies Mel has Worked 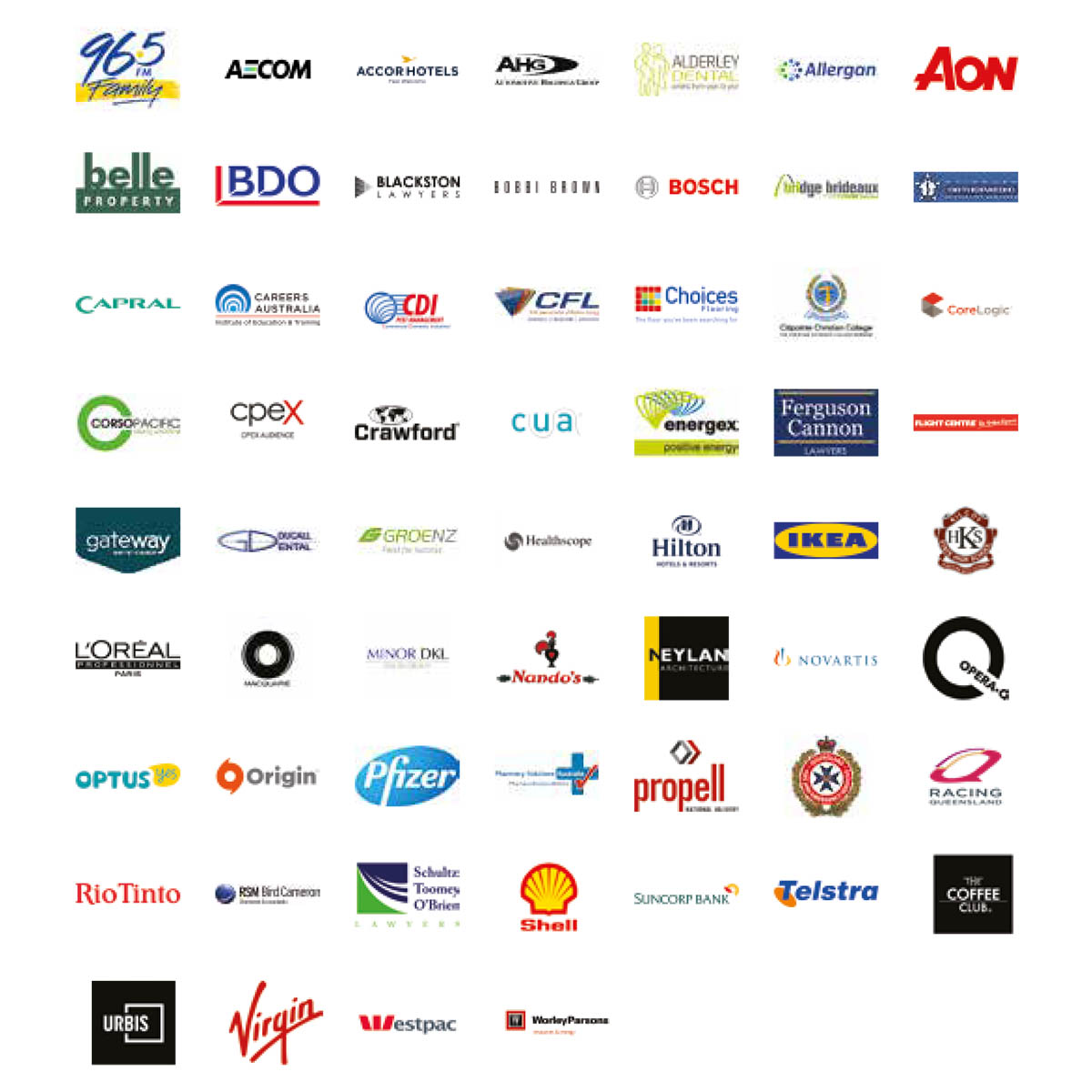